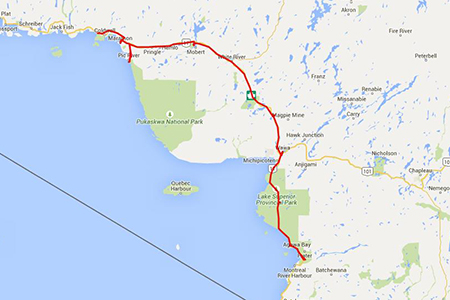 July 1 brought Canada Day. I got an early start, put on everything I owned and rode back to Marathon looking for breakfast. It was hard to find a diner but I eventually found one. I ordered off the menu, which it turns out marked be as a outsider. Everyone else just walked in and asked for "breakfast" and got their eggs/potato/meat breakfast of perfection.

I had no plans for the day. Thought I might make it back into the US which was under 300 miles away. Certainly as far as Wawa which was about 130 miles away. Or the metric equivalent.

A minor road to the right had sign for the Pic River/Heron Bay so I figured I'd check that out. I came upon a First Nation reservation which was a fairly run down series of small houses. I took some time to walk around the cemetery. These towns have their Christian churches and cemeteries of crosses. Also a bit run down, but the cool think is that some of the graves are decorated with trinkets to commemorate the person. It is a nice personal touch. 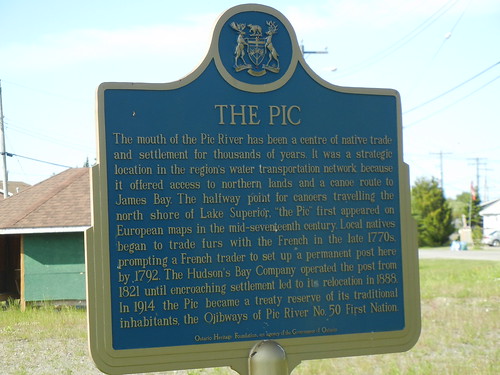 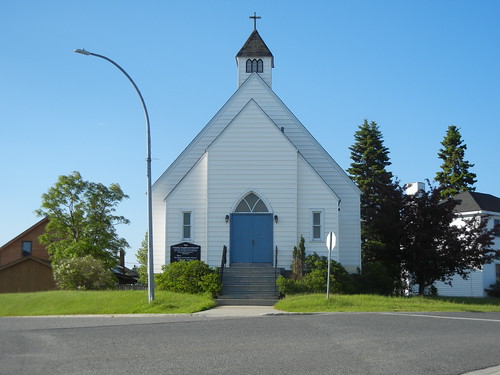 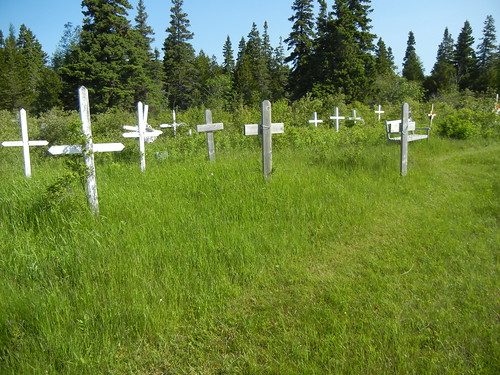 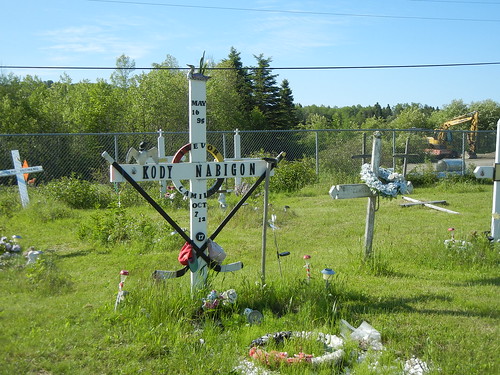 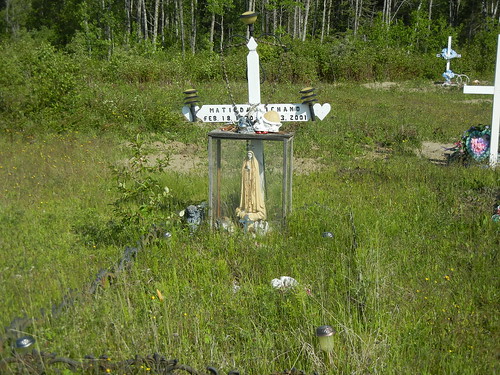 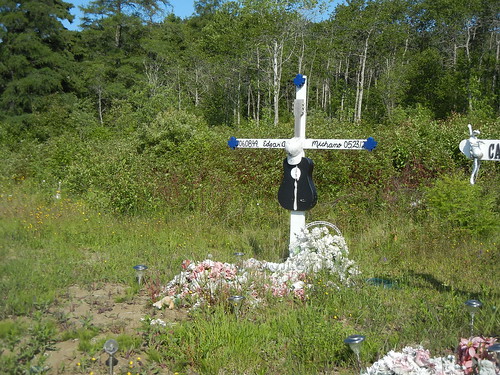 I continued on down the road and ran into Pukaskwa National Park where admission was free for the day and they were handing out flags, for Canada day. Free is good. 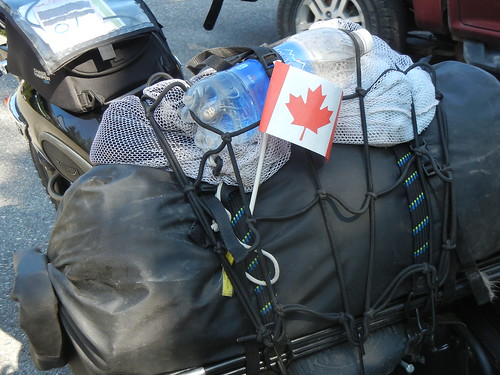 The visitors center at Pukaskwa had free coffee and comfortable seats and lots of windows to let the sun shine in. It was staffed by pleasant youngsters, and a group of high-school-age hikers came in from a four day hiking/camping trip full of enthusiasm. They came in singing "Our country tis' o thee", so they had the wrong country for Canada day, but it turns out they were Americans, a fun group of kids.

Traveling alone is nice because it opens me up to chat with people I meet on the road, which isn't usually in my nature. I get eager for a bit of conversation and often people respond to with equal enthusiasm. Then there are the times I am just that kinda creepy guy who talks to strangers. I was tending towards the latter, so I decided to take a hike.

It was going to eat of the day and I wasn't going to make it back into the US. Some of my plans for the UP may end being cut, but it was a beautiful day and it was time to maximize the present and worry about the future later. 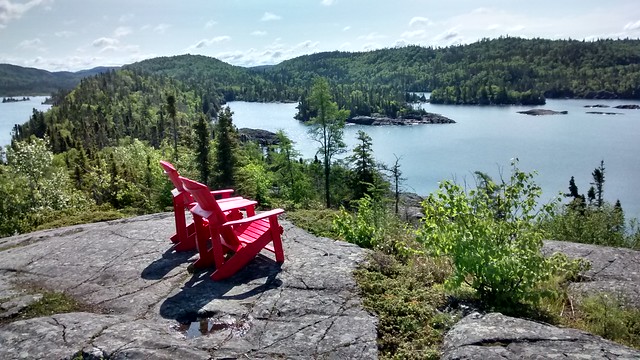 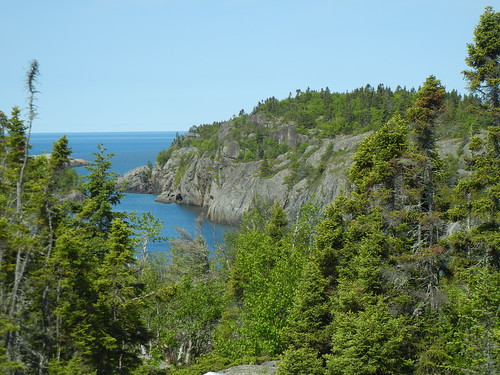 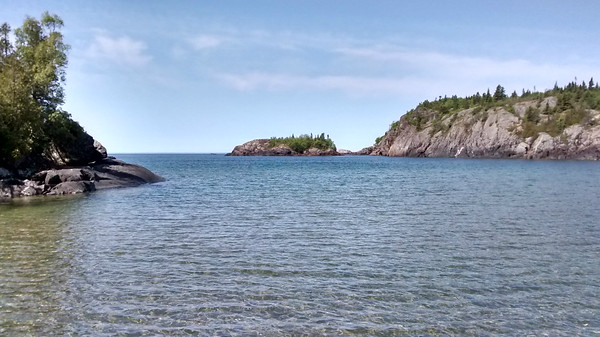 It was a highlight of the trip. So peaceful on an early summer's day.

From there I was off the lake for a while, Rt 17 is inland quite a bit. I made miles. I stopped in White River for gas and a fast-food burger. There was a pile of motorcycles parked together by a diner. I rode over to check them out, and a middle-aged lady comes out of the diner and goes to one of the bikes. We chatted a bit, she was recently single (widowed or divorced?) and had bought a bike to help with her transition, a small cruiser like a Star 650 or something. She was on her first long ride, a charity ride around Lake Superior. She signed up alone and was traveling with the other folks who had signed up. She was having a great time, but had come out for some Tylenol cause the miles were adding up.

She trotted back into the diner to re-join her new friends. I thought about going in and joining them, crashing the party. But I assessed the open-to-conversation or creepy-stranger thing, and continued down the road.

More miles down the road I got tired of major highway and was ready for a side-trip. I pulled a u-turn for what turned out to be a trail run by the local snowmobile club. So, I ride down this road/path not too far

and come across an animal leg tied with wire to a branch: 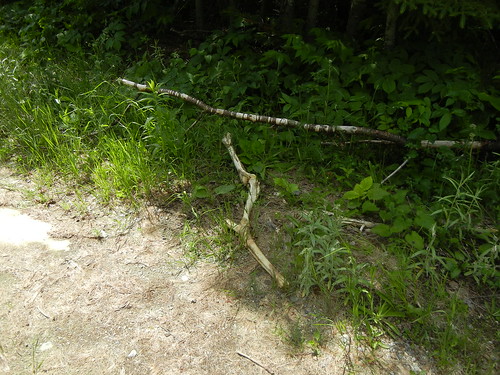 And all around are a bunch of these:

Now, I know that coyotes are big up there, but that is a wolf track. No doubt in my mind. And they were all up-and-down that road. So, pretty cool.

There were also no signs of any tire tracks, jeep or ATV. I made three or four fairly minor water crossings. Well, minor for some guys on some bikes. For me ... they really were not that big of a deal. I got off the bike and scouted the best path and made sure the bottom was solid enough. Still, they had my adrenaline up a bit and me second guessing my decisions. My biggest fear on these was really that I sprain or break an ankle in a fall. I was really pretty remote and had no right to expect anyone to come by for weeks. If something went wrong I could hike out, but not with a broken leg. And, well ... wolves.

Eventually I ran into a water crossing that I couldn't manage:

So I rode back out slowly looking for moose or something. No luck. But back on the hardtop I spotted one down the road. Then on to Wawa to find a blanket or something, because I didn't want to be as cold as I was at Nyes again.

In Wawa I went looking for a blanket. I figured it would have a Wal-Mart or something. But no, it's a lot smaller town than I expected. There was a little dollar store where I got a small fleece blanket, and it about saved my life. It made all the difference in the world.

Saw these cans in that store and they made me remember a friend-since-passed Joe Spado. In his last hospital stay he realized his dinner's similarity to dog food, and as always found the humor in it:

I also ran into this guy, Jorge Forero:

Jorge has bladder cancer, and depression. So, clearly, he decided to buy a motorcycle and ride up to the Yukon! He was spreading the word about the "The Zeitgeist Movement" which I'll admit I didn't quite grasp after reading a bit on it. But Jorge was a kind and friendly man, and a joy to talk to.

There's a lot of time to think on a motorcycle ... not sure I could handle it knowing there was a cancer growing in me.

I decided to ride down to the Agawa Bay Provincial Park campground and spend the night there. Just south of Wawa I pulled into the breakdown lane for a picture. An OPP officer pulled in behind me to make sure I was OK, I just gave him a thumbs up and took off. He and I frog-jumped each other for most of the remainder of the ride. I'd pass him as he pulled over to run a speed trap or something, he'd pass me as I stopped for a picture. Repeat. 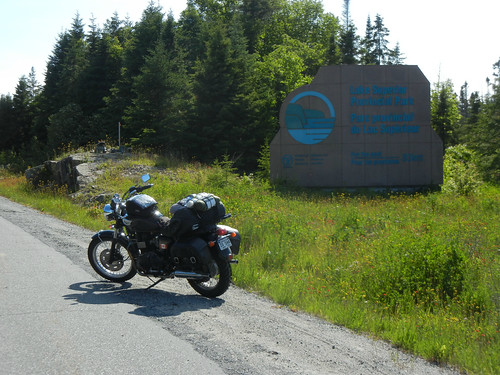 Once I got back on the lake shore it got really beautiful (and cold) again.

One more side trip, even though the day was getting late. They are hard to resist. 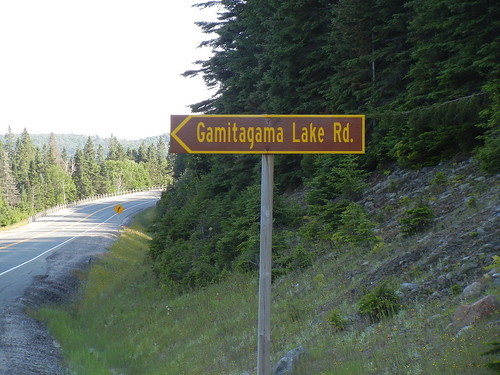 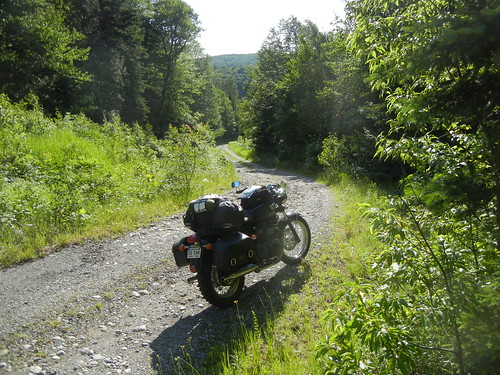 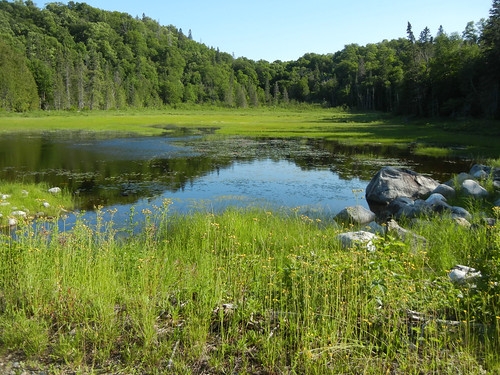 And finally to camp. 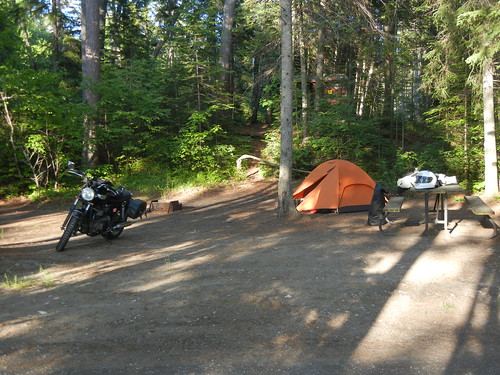 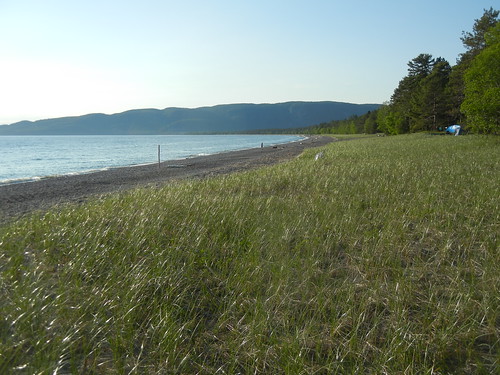 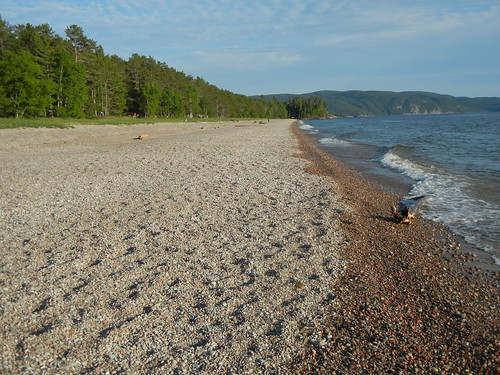 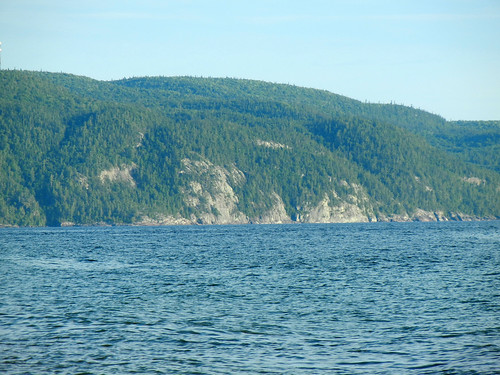 The campground was too big. Too many people. Folks didn't chat or make eye contact with each other because there were too many folks. Nice enough location, but too many people.

I went for a ride after setting up camp to explore, and I find the perfect campsite just down the road: Crescent Lake. It was too late for me, but I recommend it to anyone else camping in these parts: 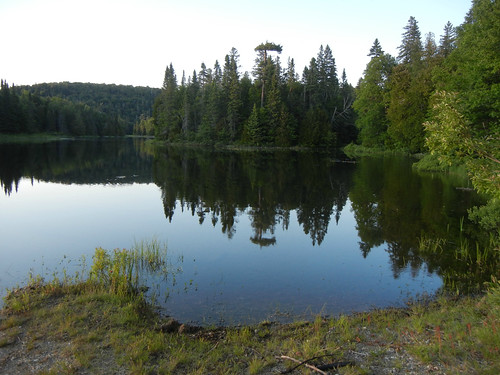 I also went looking for gas, but the station appeared to be closed (but it did have wonderful graffiti) 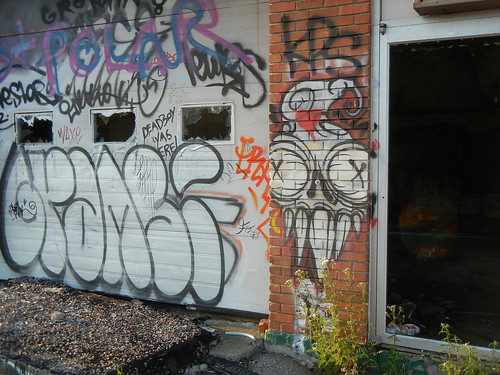 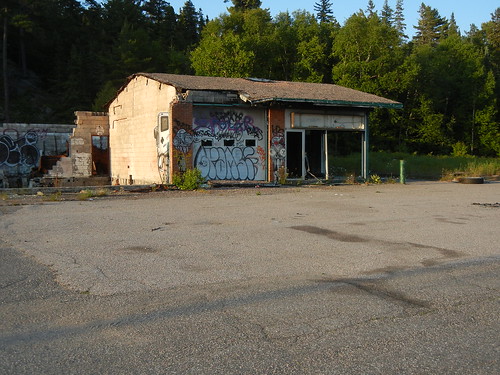 It's for sale, if you're looking

Then back to camp for sunset: 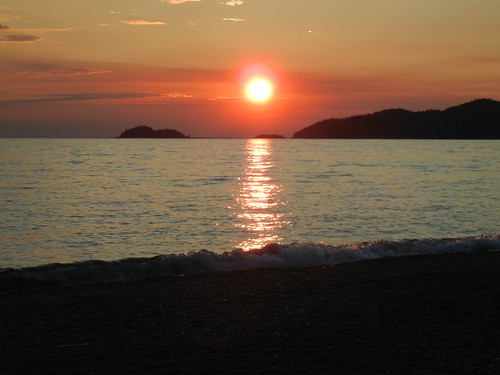 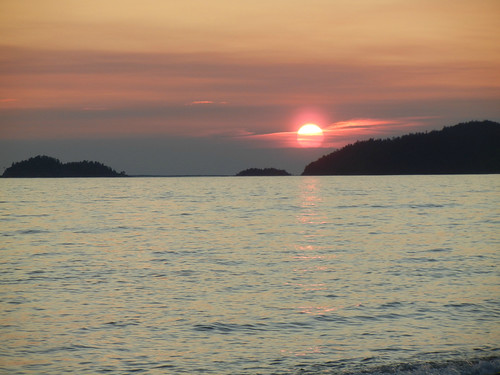 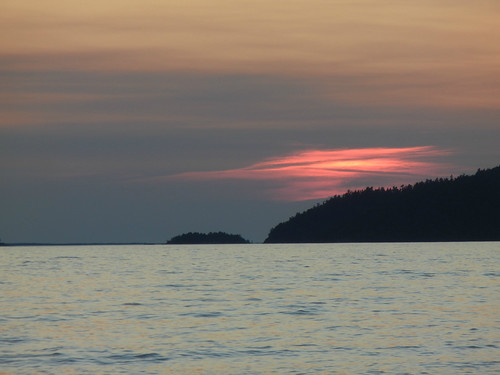