Motorcycle did well, until the end. It was an official "Good Trip", with the weather mostly not cooperating, but we didn't let it get us down. At least when it was cold, it wasn't raining. When it rained, it was mostly at night and temperatures were pretty comfortable. In Vermont it rained, but at least there weren't any bugs. In Canada the bugs were horrendous, but the weather was good. The beer store closed early, but at least I carried gin. When the bike let me down, I was able to find help and the sky was blue. The hookers didn't make us wear condoms. There was always a good side to focus on.

Friday wife headed to work and the kids to school. I had the house to myself, and finished packing and loading the bike. Could have been stressful, but I was only heading to Oshkosh so a late start would be OK.

I got loaded, everything strapped down, and plugged my cellphone into the charger on the bike. Nothing. No power. Crap. So I unstrapped everything and took the seat off to find the problem. A wire broke at the lug at the battery. But, I cannibalized the part from wife's bike, put it on mine, emailed her an apology, and headed out.

Rode interstate to Fort McCoy, and rode some tank roads there. Way too sandy. My Anakee 2's were way better than the RoadRiders, by way more than I expected, but I'm not used to sand at all. But I ran into sand a bit on the trip, and kept getting better.

Then a straight shot to OshKosh to stay with my friends Mike and Shelly. Shelly was heading off to Costa Rica late that night, but we had dinner and a movie before she headed out.

We ordered take out from a Japanese place, I got a lunch box: 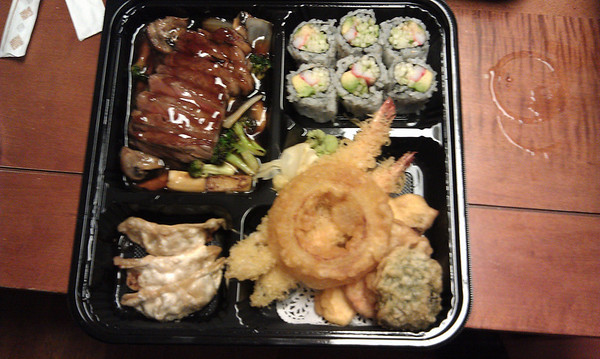 Then to a local movie theatre that shows B horror flicks for free. What a great group, just a bunch of cool fun nerds that get together to keep this theatre thing working. You can buy a beer and popcorn, and yell at the screen if you want. A bunch of them made Dead Weight (http://www.carryingdeadweight.com/) which is a great zombie flick that shows you don't need a ton of money to make a movie if you have a good story. If you like those movies at all, you should buy it.

Man that was fun. Next morning Mike, me and my buddy Marty went out for breakfast. Then Marty tried out the bike, and then I headed out. 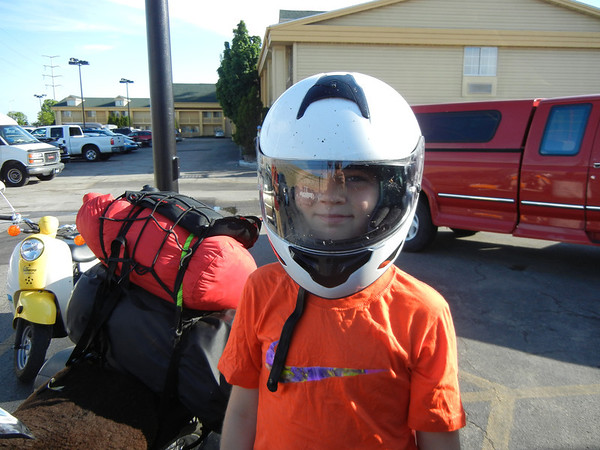 After breakfast with Mike and Marty I pounded the four lane interstate up north of Green Bay then the two lane along the coast of Lake Michigan. It is no strain at all on the Bonnie to keep up with interstate traffic, and keeping her under 80mph takes some intention. She can cruise fast all day long and overtaking cars and maneuvering quickly is no problem. Wind would probably bother me if I'd ever had a bike with a fairing, but I haven't so it doesn't. Only problem was in construction. I wanted to keep enough distance between me and the car in front of me so I had time to maneuver around holes and obstacles. But when I left enough space, a car would dart in there. I managed.

You can feel Lake Michigan way before you see it. It creates a mass of cold air. There were thunder cells to my west, but blue sky above. I put on my heated vest. The heated vest was awesome.

I cut north through the UP on a USFS road. I wanted to get close to the Canada border today so I didn't have a lot of time to play, and I already had the indirect route planned. But I took a bit to ride a logging trail to get into the maples. I love a maple forest. 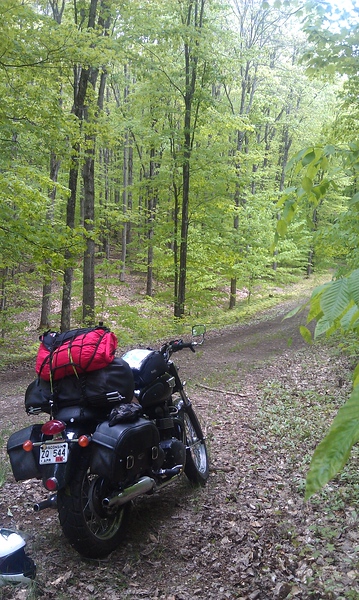 At first the mosquitoes mobbed the motorcycle, I guess because it was the warmest thing around. Then they started getting interested in me. So I left.

Then up to Munsing and a ride on H-58 through Pictured Rocks, which was kinda the focus of the day's ride. Smooth pavement with lots of sweeping curves that you can see through. Pretty fun to ride fast. Saw a forest full of Trillium. 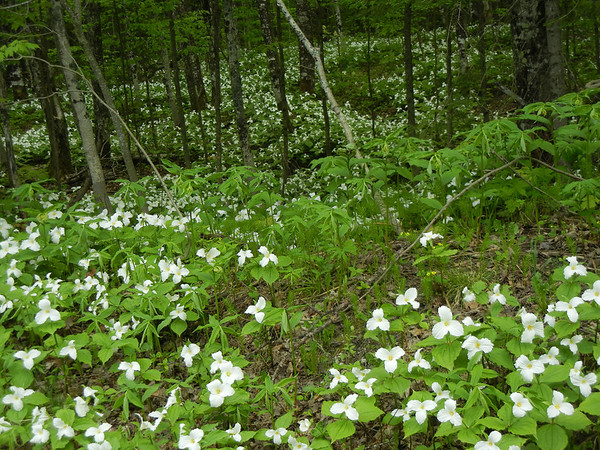 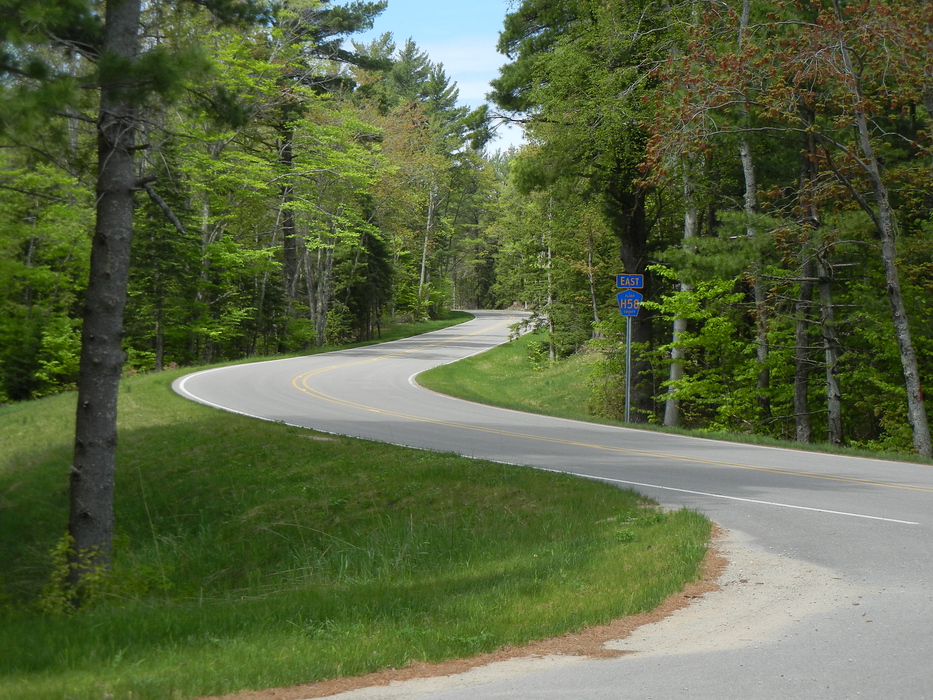 There was lots of fog coming of Lake Superior. Some dude showed me a tree frog:

Then I wanted to cut along the Truck Trail I saw on the maps over to Whitefish Bay. I wasn't sure of the conditions of the road though. I asked at the gas station and they said it was too sandy and rocky for motorcycles. Another guy at the pumps said it was fine. So I tried it out and it was fine. Started out paved with a canopy of maples, then nice packed dirt. There were points where there were pockets and strips of sand that would grab at the wheels, so just had to keep aware. 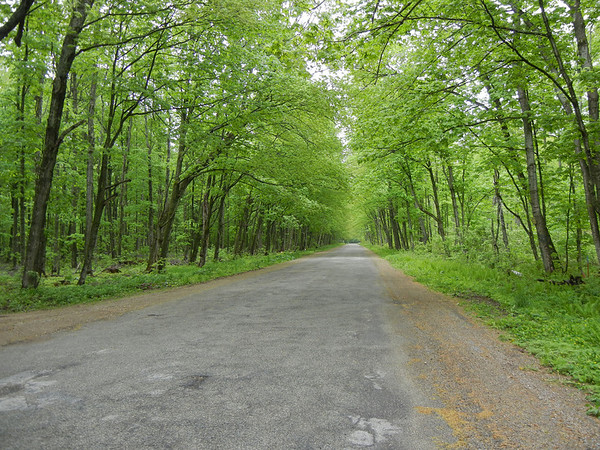 Stopped and listened to a loon. Then heard thunder. No worries, it was behind me. But then it was over me. Mosquitoes mobbed me while I put on my rain gear. At one point they were all around my head, so I pulled my helmet on. So, they all just mobbed my face instead. Yuck.

A had a campsite on Whitefish Bay reserved, and I stopped to look at it and it was perfect. But, it was raining hard and rain was predicted for the next day as well. It's one thing to setup in the rain, but I really didn't want to pack wet stuff in the rain too. So, I found a motel. Restaurants had closed by the time I was settled, so it was a gas station dinner for me. 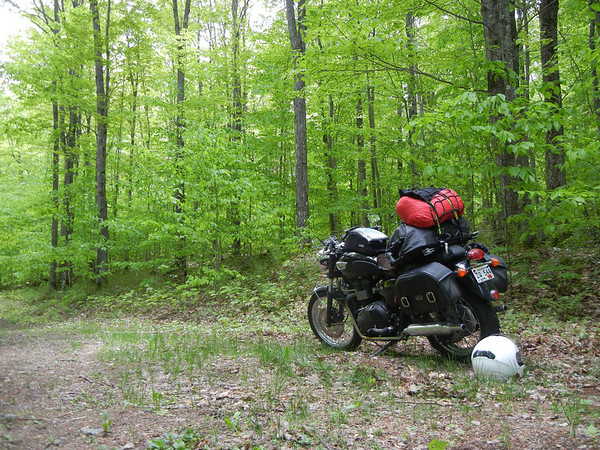 And then a dromery water bag on top of all that. All strapped down with roc straps and a cargo net over that for shoving miscelaneous stuff on the there as we go

I have it all to about where I like it by now. First big improvement was getting rid of all the friggen trash bags and zip loc bags for waterproofing, and going to dry bags. Much nicer. Not folding my tent and storing it with the poles anymore was nice change too.

I also carry a lot fewer cooking and camping supplies than I used to. No more saws or hatchets, or spatulas or fry pans. I carry just enough to keep me from getting hungry if I camp without having found dinner, remembering that everything tastes fine when you're camping. And some coffee and oatmeal to get me going in the morning. If I bother with a fire at all it's a Duraflame log I pick up during the day.

I never used my leather jacket liner. Between the sweatshirt and heated vest I didn't need that.

I never used the extra gas, but I'm glad I had it for this trip. Gas was sparse, gas stations close early Sundays, they go out of business, one I found was out of gas. The extra gallon in my saddlebag gave me a nice safety margin and relieved me of a lot of worry.

Biggest issue I need to figure out is fixing a flat on the road. I rely on the phone/credit card method for now, which is perfect for bombing around Wisconsin. But before the next trip like this one I'll probably get a center stand and bring a patch kit, tire irons and the wrenches for pulling off the wheels.