This was a four-night/five-day exploration of the remotest areas of NE Minnesota I could get myself too over the 2012 Labor Day weekend, Friday morning. I left the Friday morning and returned home the following Tuesday night.

I camped, but really just slept outside. I had enough access to towns that meals and such were mostly not dealt with at camp.

I had to go to work first, and didn't get on the road until about 10:30. TI pretty much just pounded up there, listening to a book-on-tape in my headphones. I stopped in Superior for some pictures near the bridge:

While stopped I noticed a problem with the bike, the chain had wet fluid all over it, there was fluid on the frame coming from the right-hand-side side cover. I figured it was brake fluid from the rear brake reservoir, but the brake felt solid. Took off the cover, and found it was blowing oil from the engine breather hose:

Kinda odd. I still had plenty of oil in the crankcase. It's been a while since my last oil change, and hadn't noticed this before then. I was running 75 mph for quite a while running up to Superior, with the occasional screwing on the gas to pass. I guess that caused it? I decided to just watch it, and it never happened again.

Made a couple quick stops around Two Harbors, but kept on pushing for the campground: 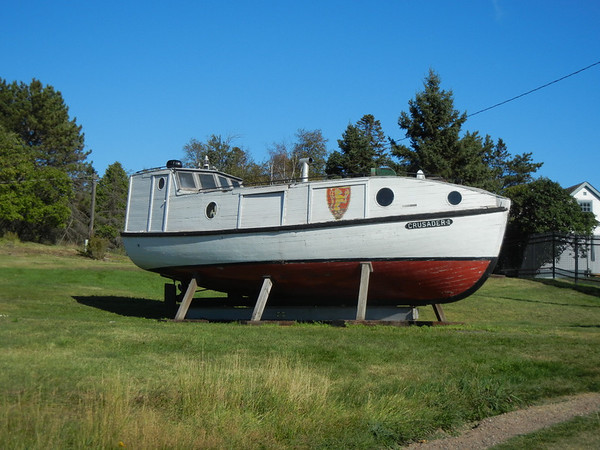 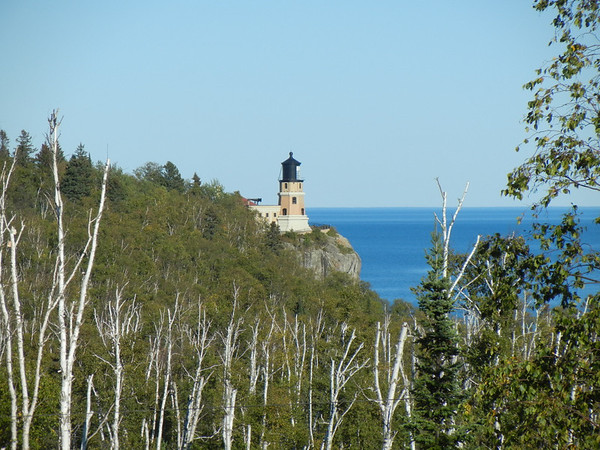 That black dry bag on the back of the bike is a Sealine Baja 55L bag, cost about $35. It was great, I didn't need to pack everything in their own zip lock bags. I was able to fit my small sleeping bag, my term-a-rest pad, my tent (without poles), four sets of shirt/socks/undies, spare set of pants, sweatshirt and jacket liner in there. I kept my rain gear in it's own little dry bag strapped to the top for easier access. All my camping/cooking supplies and food fit into the side bags pretty well.

I caught the Sawtooth Trail out of Tofte, and from there to "The Grade" to the campsite. It turned to dirt road pretty much right away, I was on a lot of dirt on this trip:

The campsite was just a short little walk from the road, nestled into the woods. It was pretty nice. The lake was across the road, not really visible from my site. Being Labor Day weekend, the sites on the lake had already been taken by the time I got there. But it was easy enough to walk down there to enjoy it, and take the occasional bath.

I didn't really have much of a plan to start out. I was staying in the same campsite the entire trip this year, just taking day trips from there. Last year I packed up each morning and setup again somewhere new each night. That gave the trip a sense of purpose. This year, I was making day trips, just pretty much wandering around. It sounds more laid back, but somehow was a touch more unsettling.

I was saving the Gunflint Trail until Monday. I was on the fence on whether to wander into Canada on Saturday, or explore the dirt roads in Superior National Forest, maybe out towards Ely. But I was going to ride down to Grand Marais either way and take it from there.

It was about 35 miles of dirt road to get there, with some nice little lakes along the way:

Grand Marais Airport, it is small

Grand Marais was a mess. It wasn't really crowded, but just a lot of vacationing people, I assume mostly from the Twin Cities. It didn't jibe the the wilderness experience I was looking for. I just grabbed gas and a snack at the gas station, and decided to head for Canada.

It was a straight shot up to Grand Portage, and a few miles north of there there were some real nice views up towards Canada: 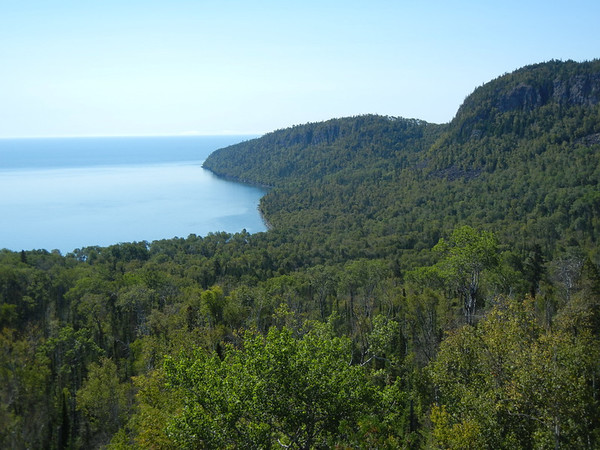 Cute blonde Canadian customs agent pretty much just wanted to know if I had any weapons, including mace. I said no. A couple more questions, then she wanted to know if I owned guns. I said yeah, but they were at home. She let me though. It seemed an odd question, but if you had a gun hidden and were asked if you owned any, you would probably hesitate thinking of what your answer should be. I think that's all they're up to, seeing if you hesitate and have to think about the answers to what should be simple questions.

I cut east over the border, there are some 500 numbered roads over there that are just a bit over one lane wide. Google Street View has been through there, it's fun to check out pictures of the area out using that.

I dig the mean moose on these signs:

Found a waterfall on the Pigeon River, which defines the US/Canada border here:

Bunch of "Baily bridges" over there, I had never heard the term before 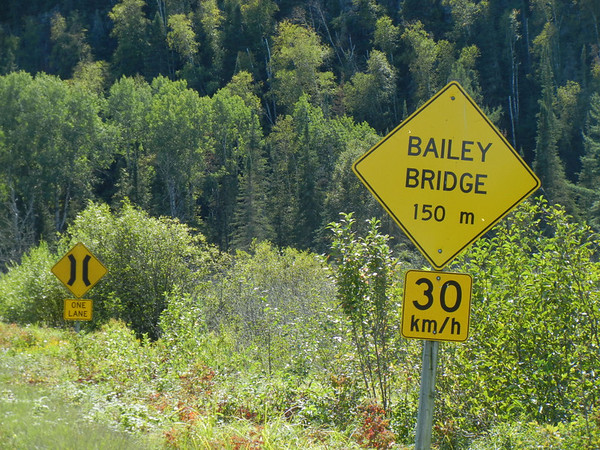 On the other side of a Bailey bridge there was a little two track path running along the creek. I rode up that to see what was around the corner, then around the next corner, then the next.

Usually I'm not worried about getting lost, but gas was an issue. I didn't bring a spare gas can after all, and the closest gas stations were in Thunder Bay and right across the Canada border. I had enough to get back to the US, but not if I spend too too many miles lost.

There was no cell signal at all up there, and I rely on Google Maps on my android phone. GPS works regardless, but you need a cell signal to pull down the map info. But, Google Maps now has an offline mode, where you can download sections to the phone ahead of time. I had downloaded the NE MN area and this area of Canada, and that worked perfect. It showed that I wasn't on a road at all, but eventually I saw a road across a valley, and Google Maps knew about that one. Problem solved, without having to double back (which I hate).

I was in boreal forest, although it all seemed to have been logged within recent history. You could really get a feeling for how expansive the land was, lots of views across vast expanses: 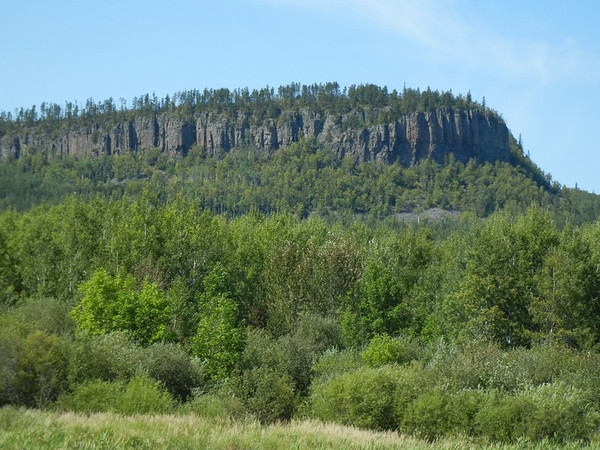 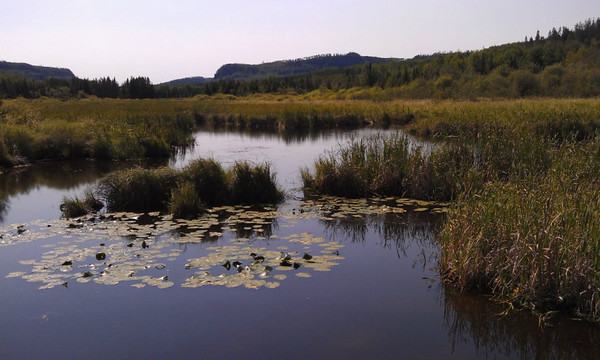 This trip was a bit of a disappointment on the wildlife front. I kept on constant lookout for moose, but never spotted one. Saw like only two deer, and I did see a couple fox which was cool. There weren't even many hawks or waterfowl around. But, the best sighting I saw was a pretty fresh pile of bear scat:

Then I made it back to pavement, had a grouse (or some sort of quail?) strut in front of me:

I am more-and-more seeing the appeal of being a hermit:

The Hermitage, it turns out, is a Buddist monastery: http://www.arrowriver.ca,

Then back across the border:

This border agent wanted to know why I went into Canada. I told him mostly "for this experience right here". He apparently had no sense of humor. I'm pretty sure he thought that I came to Canada to ride around the dirt roads without destination was about the nerdiest thing he had ever heard. He wanted to know if I had met up with anyone, then let me go. Both border crossing were way quick and easy, but it's a pretty small place to cross.

Then pretty much directly back to the campsite:

The night before the loons were calling all night long, which was really nice. Tonight there were two guys out on the lake until after 10PM, just fishing and arguing. I don't know what they were on about, but every 10 minutes they were "bet you a hundred dollars" about something. Must have been drunk, or brothers, but probably both. No (other) loons that night. I just sat there and drank some Laphroaig I had brought along, and enjoyed a Juni special (a Duraflame log, burned one every night). 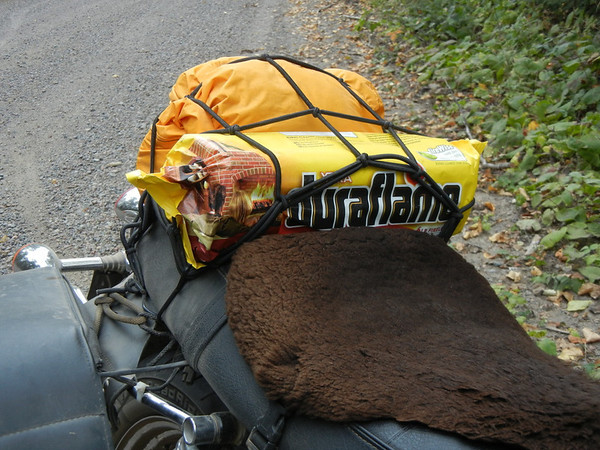