I took a 6 day camping trip on the Bonnie from Fountain City, WI up to the Michigan Upper Peninsula and back. I went alone, because my wife Kim is awesome and didn't mind.

I averaged just over 300 miles a day, which was plenty for this trip. I needed to stop and see plenty of sites, and setting up and breaking down camp takes up a while.

I carried a two-man tent, big-old sleeping bag and a white gas stove and all sorts of misc. camping supplies. The plan was to mostly eat at restaurants and snack, and not do a lot of cooking in camp. 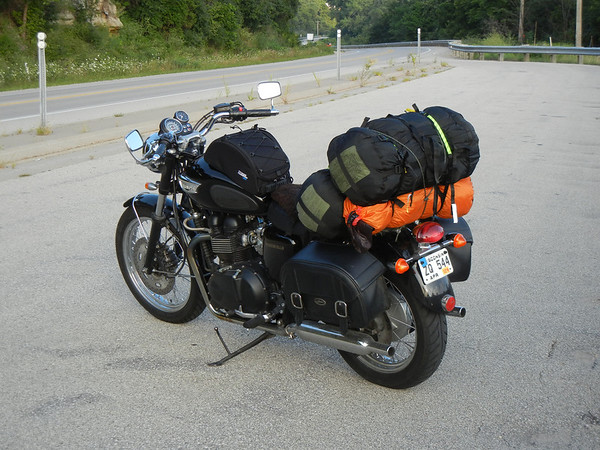 Packed and ready to go

First day out was a 339 miles ride from home to Little Girl's Point county campground, which is on Lake Superior just over the WI/MI border.

The plan was to shoot up to the Chequameqon National Forest, have lunch at the Delta Diner and ride some back roads, then run up to the campground by early evening. And that is what I did.

What a great route. I got my tracking software on late, but I made a pretty direct ride up to Radisson. But then some nice exploring of Chequameqon, a bit of dirt road, lot's of beautiful roads, perfect weather. Perfect.

Some of the best riding in the world is in the National Forests. The roads are good, there are plenty of back roads to explore, it's remote, good scenery and potential for wildlife sightings.

Forest Road FH35 from Drummond up to the Delta Diner is Awesome. It is smooth and windy and fast, especially if you believe you are somehow impervious to deer. 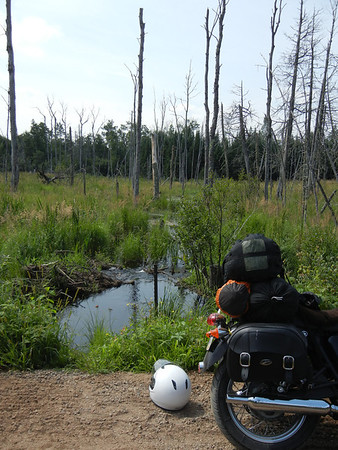 A random sighting on a dirt road in the middle of nowhere. Kinda odd. 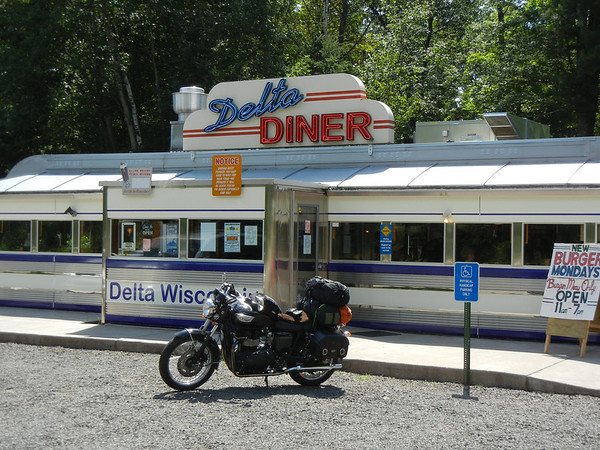 Delta Diner - Great Eats in the Middle of Nowhere!

I couldn't decide between breakfast and lunch, so they suggested a couple eggs on some red beans and rice. It was a correct suggestion.

Superior is incredibly clear, I could see to the bottom everywhere I was. The water was cold enough to be refreshing, but not too cold to be hard to get into. The beach here was smooth rocks, but if I waded out just a little bit the bottom turned to sand. 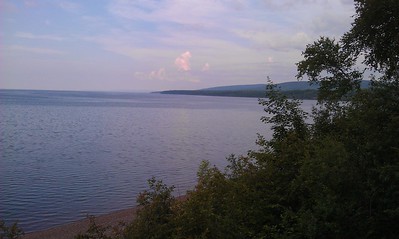 Day 2 was a 240 mile through the Porcupine Mountains Wilderness State Park and up the Keweenaw Peninsula to High Rock Point.

In the Porkies at the mouth of the Presque Isle River (end of Co. Hwy 519) is a nice set of short walks to see the falls. There is a sandy beach and a nice looking campground. I believe my family will vacation here next summer.

Entrance of the Porkies 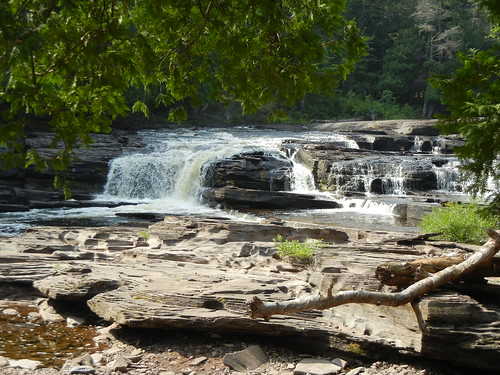 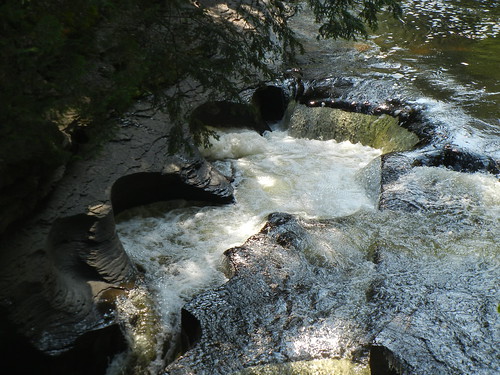 Waterfalls at the Presque Isle River 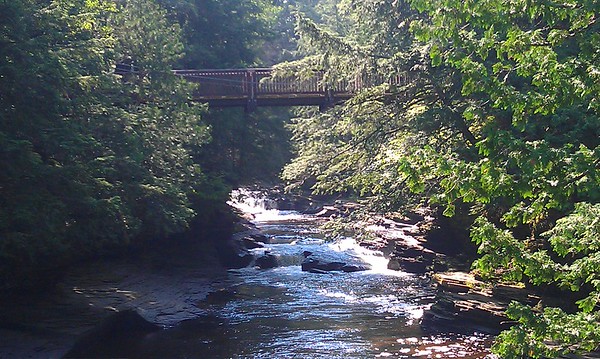 From there I rode over to the Lake of the Clouds, which is well worth the side trip. I ran into Gust on his Ural and we chatted a while. I just found him on the web: http://grubygust.com 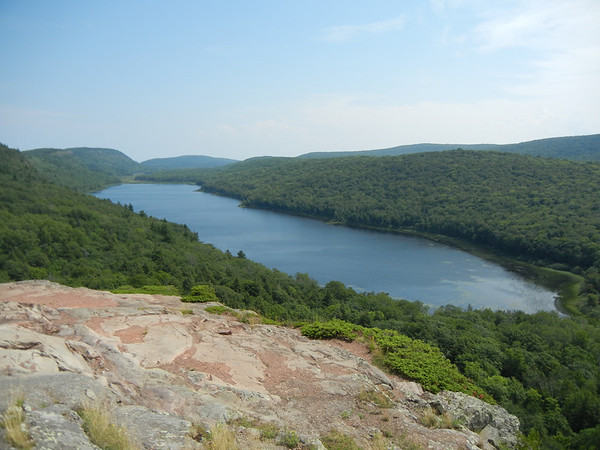 Lake of the Clouds

In South Range, MI I explored the town, and found this odd little sculpture. I believe this is where Sisu The Clown lives. 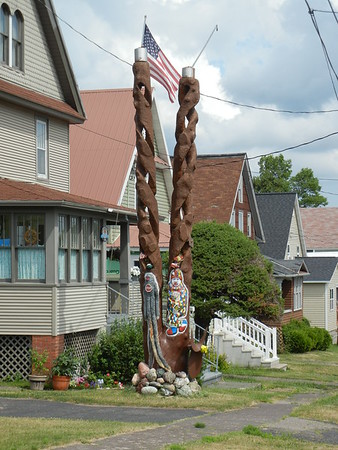 Sculpture at Sisu the Clown's place

From there I crossed the canal at Houghton

I didn't explore though. I figured I could do that on the way back, and rain was threatening so I wanted to make camp. Although, as it turned out, that didn't happen until sunset anyway.

I took 203 to McLain State Park, and the up 26 along the west shore of the Peninsula

And I check out Calumet. I think it's neat when I notice common building materials and styles in a town. In Calumet a lot of the buildings were made of these large, red bricks. 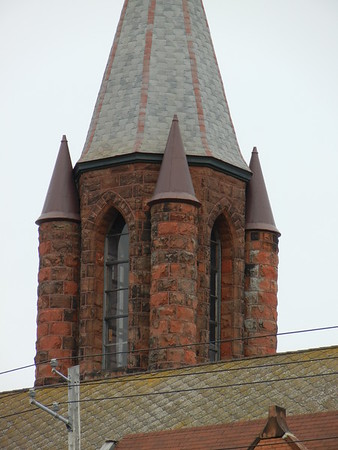 Then to the Jampot just before they closed at five. This is a bakery run by a local order of monks. They were not chatty. I bought some fruit cake thoroughly soaked in bourbon or something. I had to wait until I was off the bike for the day to eat much of it.

From the Jampot I continued up to Copper Harbor on 26. 26 is awesome up there. It has these rises/dips that feels like horizontal curves. It's just fun to ride, and you're right on the lake. I had planned to take Brockway Mountain Dr, but just missed it in my hurry to make camp. But it couldn't be much better than 26, and I'll catch that road next time.

Some other motorcycle travelers had suggested I camp up at the tip of the Keewenaw Peninsula at High Rock Bay, which is down the seasonal roads past the end of Route 41. But, I didn't want to stress me or the bike out on rough roads, and as I say rain was pending. At McClain State Park they told me there were sites available up at Fort Wilkins State Park just north of Copper Harbor, and I planned to camp there. But, those sites were ugly and crowded and miserable. Just riding through them was a low point of the entire trip.

So, I blew it off and floundered around looking for High Rock. I actually looked for a sandy beach on the east shore first. There is no cell coverage up there, and I use my Droid for GPS, so that was useless. But, I didn't stress and had fun. I came to some dead ends and water crossings I couldn't make and had to turn around. I ran into another guy up there who knew the area and he got me oriented. High Rock Bay is at the end of snowmobile trail 134.

The End of Highway 41, from here it's all dirt road to the north 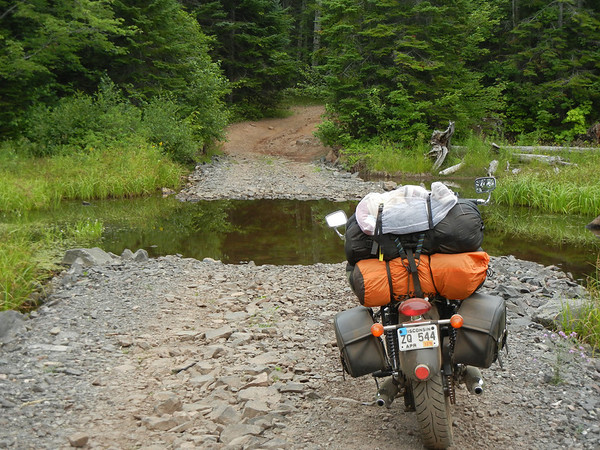 I eventually found High Rock Bay, at the tip of the world, right before sunset. I hadn't realized I was in the Eastern time zone, so I had actually had an extra hour of daylight I didn't realize I had coming, which probably saved me. But, worst thing that could have happened is that I would have camped not on the lake. I had food and camping supplies, not much could go wrong that I couldn't wait out.

It's a remote place, but also a destination for ADV/ATV types and a couple of them rode through while I was setting up. One family came by and 2 ATVs and their young boy on a bike. They were fascinated by me camping alone, one kid kept asking "Aren't you scared?" I told her I hadn't been, until she pointed out I should be!

It started raining right as I finished cleaning up from dinner, and rained all night right until it was time for me to get up in the morning. So, that worked out perfect. 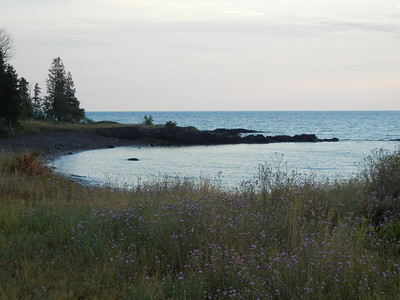 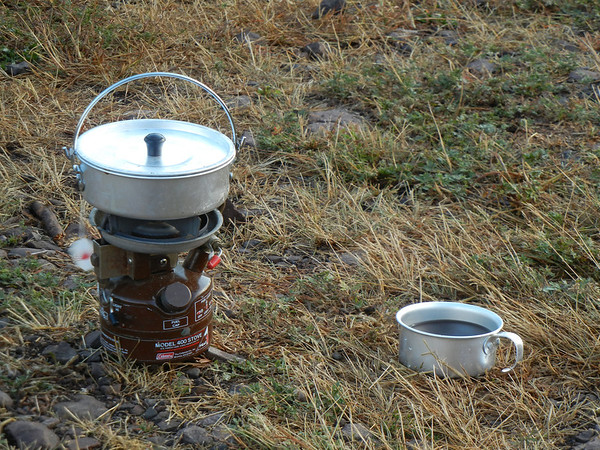 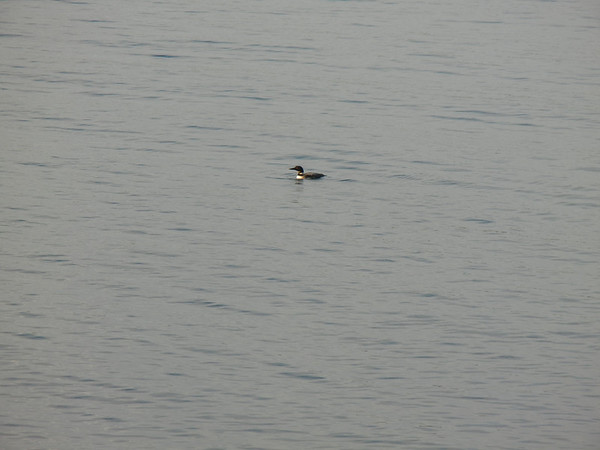