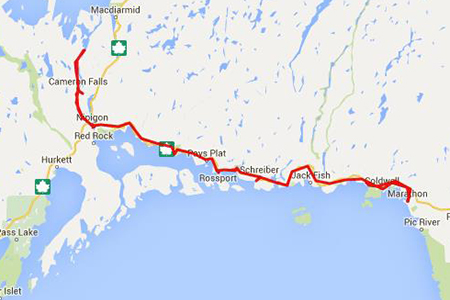 I woke up pretty early and wandered over to Tim Horton's for coffee and to devise a plan. Route 585 headed north from Nipigon. There aren't a lot of left-hand turns when you're heading east. There's very little access to the north. So, I decided to go see what there might be to be seen.

At first it was pretty plain road, and I was getting tired of the constant power lines 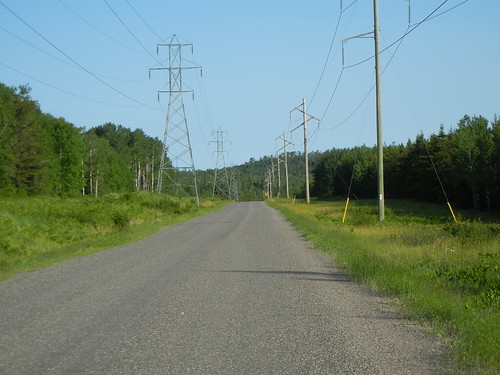 But after a while I caught a glimpse of a waterfall. Then I realized that "Cameron Falls" on the map wasn't a little town that possibly had a place that would sell a cup of coffee. It was a waterfall. 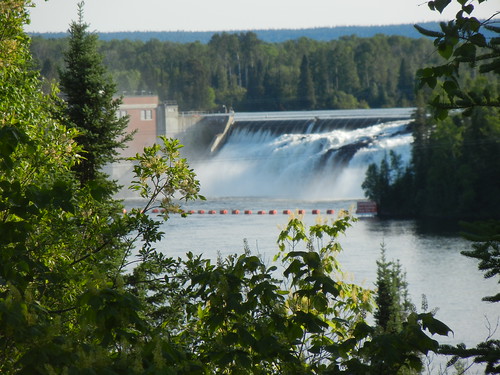 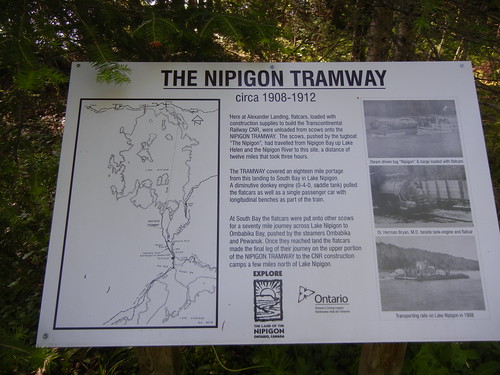 Here at Alexander Landing, flatcars, loaded with construction supplies to build the Transcontinental Railway CNR, were unloaded from scows onto the NIPIGON TRAMWAY The scow, pushed by the tugboat "The Nipigon", had travelled from Nipigon Bay up Lake Helen and the Nipigon River to this site, a distance ot twelve miles that took three hours.

The TRAMWAY covered an eighteen mile portage from this landing to South Bay in Lake Nipigon. A diminutive donkey engine (0-4-0, saddle tank) pulled the flatcars as well as a single passenger car with longitudinal benches as part of the train.

At South Bay the flatcars were put onto other scows for a seventy mile journey across Lake Nipigon to Ombabika Bay, pushed by the steamers Ombabika and Pewanuk. Once they reached land the flatcars made the final leg of their journey on the upper portion of the NIPIGON TRAMWAY to the CNR construction camps a few miles north of Lake Nipigon.

There were a number of hydroelectric plants along the river. The guy back in Thunder Bay told me that they were scheduled to be decommissioned. Instead, an electric plant in Thunder Bay was being retrofitted to burn peat pellets made from mining bogs up north. If I have the story straight.

Own pellet on the observation deck for Cameron Falls.

I started to work some dirt roads to the east over to Rt 11. In retrospect I wished I had. But this was meant to be a short side trip, and I was thinking it would take too long. Too long for what though, I had no plans?

Instead I rode north to the end of the road, at a big old dam holding a big old lake back 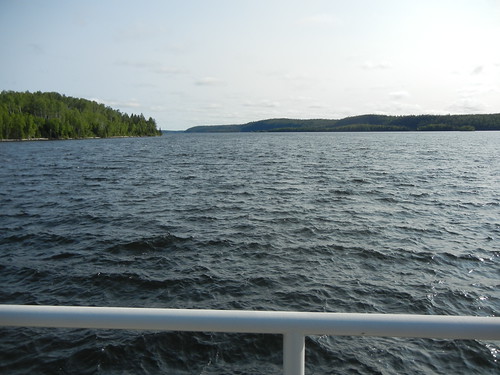 Then a run back down to Nipigon, and back to Tim Horton's for another cup, right back where I started.

I had expectations of hanging out in the small towns along the shore of Superior. Maybe hanging in cafes and drinking coffee and eating scones while looking at the lake. Maybe duck my head into an art shop or two (well, that wasn't gonna actually happen, but I'd certainly look in the window). Wander the trendy shorelines.

But I suppose that is Quebec stuff, not Ontario stuff. The towns were rugged places without those sorts of frills. The folks were really nice, but there isn't a lot of extra money floating around up there. A tough economy showed. There wasn't the sentiment or cash or tourist stream to support the trendy tourist stuff.

Still, the towns were worth exploring, and the history is apparent everywhere. 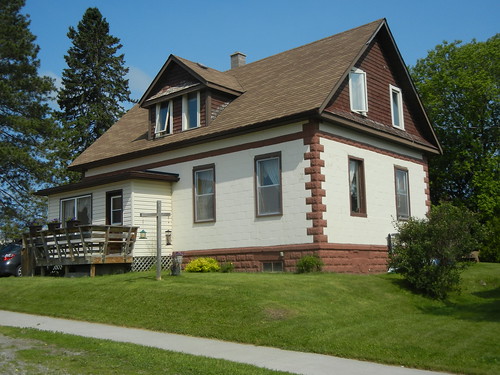 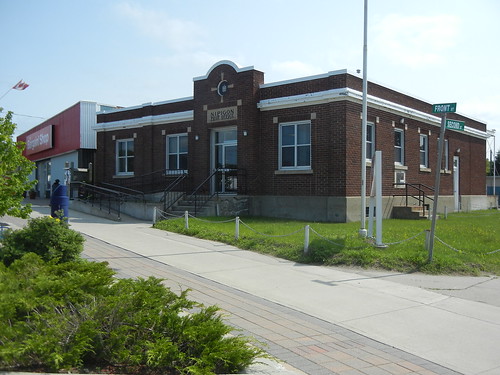 Then finally moving forward, I ran down 17 again, with the occasional stop along the way 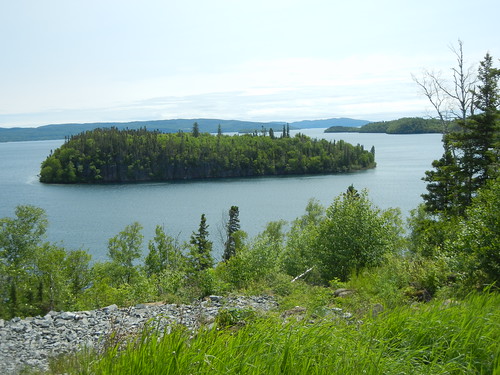 I kept trying to pull right hand turns to get closer to the lake, but they generally were just clusters of vacation homes with the rare access to shore

There were First Nation towns scattered around. With Christian churches. I know enough history to get it, but it always seems wrong and sad to me.

Spending a day just running down a road like 17 is not my idea of fun, even with the views. Maybe the Bonnie isn't the right bike for that type of cruising. More likely I am easily bored and need more than that to occupy my attention.

The towns weren't really enough either. But the Provincial Parks were. They were just awesome and well worth every second I could give them. 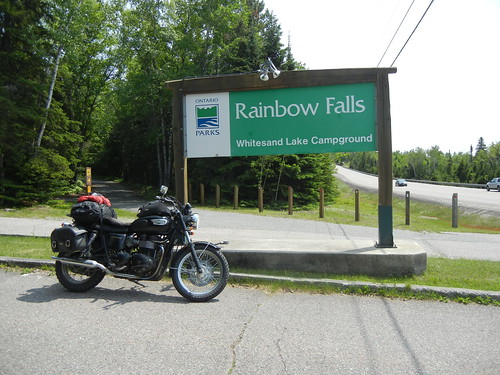 There is a short hike to the waterfall, and then a bit longer hike to a view that I was assured was worth the walk. It was going to suck up a chunk of the day ... but why not?

And if you have to hike, Canada is the place to do it. Their miles (they call them "kilometers") are way shorter. For that reason you can do the ton up there with about no effort at all. 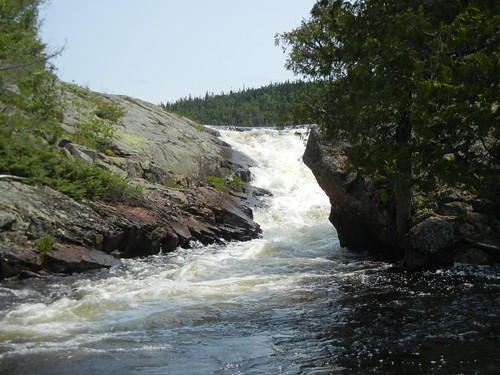 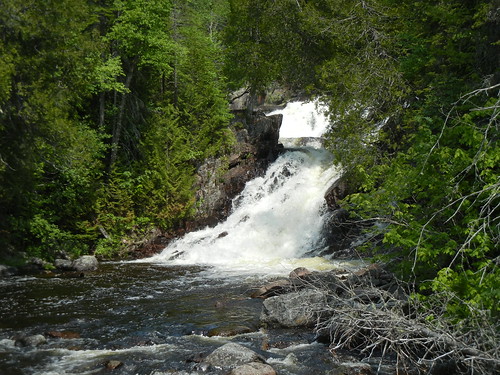 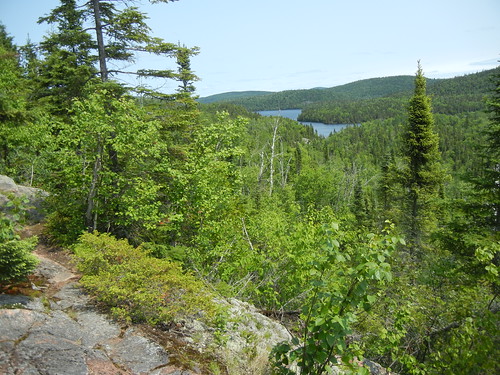 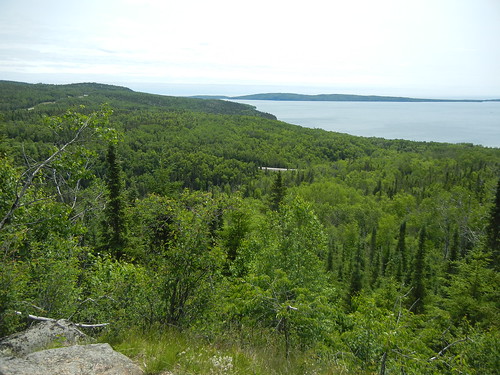 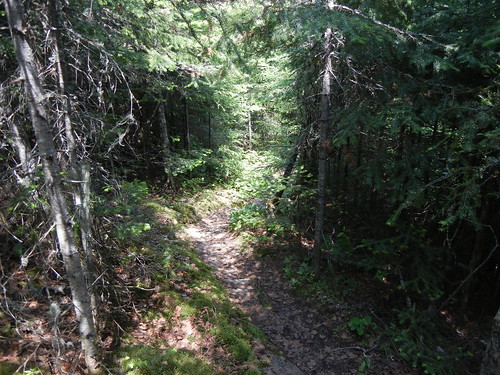 From there I rode down to Schreiber and checkout the railway museum, then I ducked into Terrace Bay to see some more waterfalls and get a truly bad meatball sandwich (note to self: don't eat at restaurants with "for sale" signs out front). 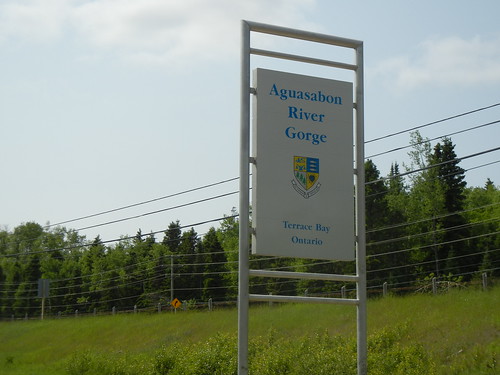 I rode to Marathon thinking if I found a cheap enough motel room I might stay there. I rode past Nyes Provincial Park to get there. The town didn't give me a great vibe and the motels were expensive and full anyways with road workers, contractors, etc. The municipal campground was too big a scene, so I grabbed a couple 40s at the Beer Store (or whatever they are in metric) and doubled back to Nyes. Glad I did. 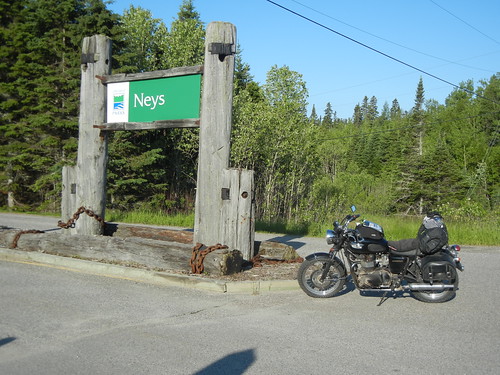 Nyes used to be an internment camp where Canadian citizens (US too?) of Japanese heredity were interned during WWII.

Now it's a fairly pleasant Provincial Park. I had a campsite right next to the lake. It was a nice sized park, people around but it didn't feel crowded. I had been put off from staying there because of the cost, but it wasn't that expensive as it turned out. I think there was a pretty big service charge when reserving online which had me thinking the campsite was expensive enough that I might as well motel it.

Bottom line, it's a nice place and well worth it:

When I checked into Nyes they told me there were bears around. Nothing to worry about, just youngsters being pushed out of their territories as Mom turns her focus to her new cubs. Poor things now need to find some unoccupied territory and need to be convinced the park isn't it. 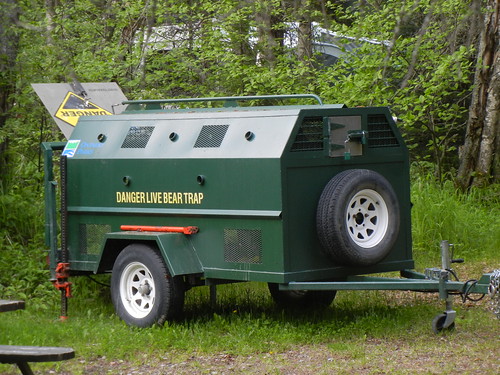 The park had showers so I got cleaned up, and sure enough there's a bear print in the sand on the path back.

I cooked something for dinner, probably something out of a can, and then checked out the sunset. 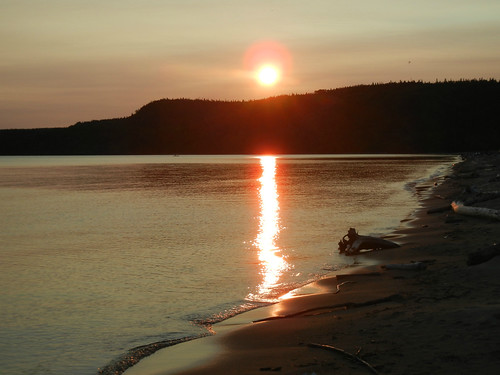 Then I decided to cruise around the campsite looking for bears. No luck, saw nothing. As I returned to my site I killed the engine to roll in quietly and not bother my neighbors, and as I rolled in sure enough I see a bear vamoose from my camp down the path to the lake!

He was a little guy, last year's cub. A circled around him trying to get a look and I could hear him in the brush, but couldn't really see him. I figured I was harassing the wildlife so I left him. I sat on my picnic bench in the dark sipping scotch from my flask. Eventually a bit of the dark was moving and coming closer. It was the bear. I got my light on him and he didn't mind and I watched as he rooted around. He really worked on some particular plants. I grabbed some later and a ranger said they were probably cow parsnip.

I took some pictures which didn't work out. He wandered away eventually and I went to bed for a cold night's sleep. Too cold. Way too cold.

Bear, if you look real close in just the right light