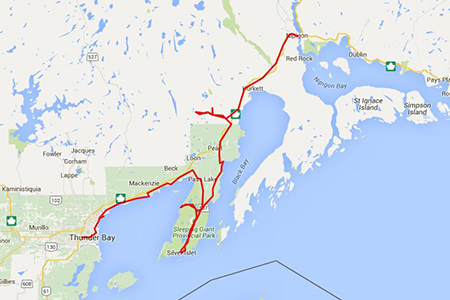 Thing about a motel room is it takes longer to get out of one than to break down camp. But at least I got a shower. The free breakfast room was crowded, so I just grabbed a banana and scrammed.

I knew I could spend an entire day exploring Thunder Bay, but that wasn't in the plan this time. So I kinda just got down into the industrial area along the shore and worked my way north.

There was this big old abandoned pulp mill. As someone explained to me, when's the last time you read a newspaper? Technology is killing the mills. One big building had collapsed, but the rest stood empty. There were big old trucks left behind. Makes you wonder, who was the last person to leave? Who decided just to leave the trucks where they were? 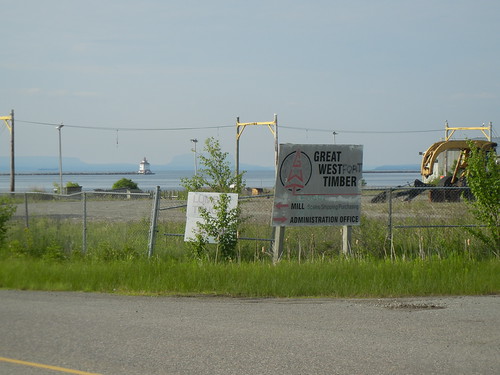 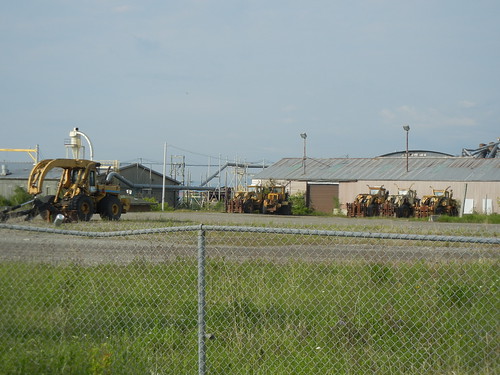 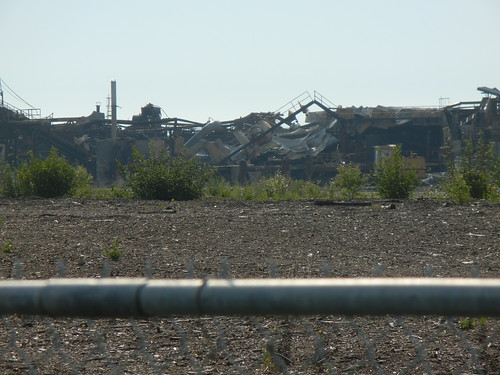 At one place there was a building near the fence with graffiti, a hole in the fence and a well-worn path. I stopped and looked at it for a little bit. I really wanted to go in and explore. I pretty much knew it was a bad idea. In the end I figured I was a guest in Canada and I best mind. That may have been a good call. When I left there was an OPP car parked on the main road. Good chance he had one of his eyes on me. Still ... it would've been fun.

I came upon a marina and I usually stop at those. I wandered out to the shore. It was silent, no one around. Then I hear this murmuring, but saw no one. Turns out there's this big piece of ... art? ... a big metal sculpture that kinda looks like a hockey stick. And there's a speaker:

Kinda interesting, the focus on drinking in there. A city worker showed up, he said the things flashed morse code at night too. Those dots on it are lights.

He and I chatted a while. His job didn't seem pressing and I wasn't in a hurry. He told me that once I got over the new bridge that went over the railroad tracks on the main highway, I should try to get to high ground and look around. I didn't think much of it, and I motored off towards Sleeping Giant.

I rode down to Sleeping Giant, hoping to find a diner for breakfast. No luck, there was a diner in Pass Lake but it was closed. I was able to find a cup of coffee though at a small shop, and a long chat with a local. She was from Denmark and moved to Pass Lake as a child. The whole area is Dutch settlers.

Then into the park. As I came around a bend, a nice looking big old bear was walking down the left lane. Not really in a hurry. It took me a full second to realize what I was seeing and I pulled to a stop. The bear just kinda took stock of me, crossed in front of me and wandered into the woods.

For me, it was a great sighting. I had made a point of finding bears last summer, going way up into the Chapleau Preserve which is supposed to be full of them. But no luck. Now, I had luck.

I told the story of the bear to the next three people I saw. All three had also seen a bear that morning! So, I suppose it wasn't that rare.

Then to the Thunder Bay lookout. Do not miss it if you get into the area. There is an observation deck cantilevered into the cliff, just hanging out into space. And a grate bottom. It was scary. I mean, a lesser of a man than me would be scared. That's what I meant to say.

There was a big old thundercell of Thunder Bay, and I'd hear a boom from it periodically. But overhead was blue sky. For now. 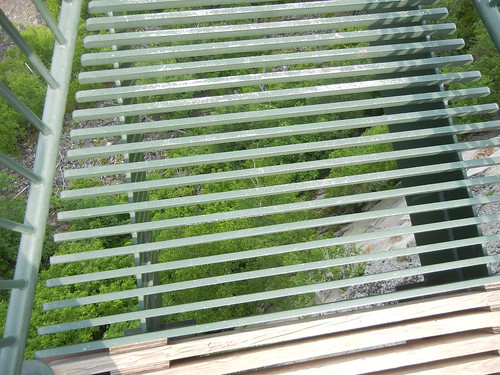 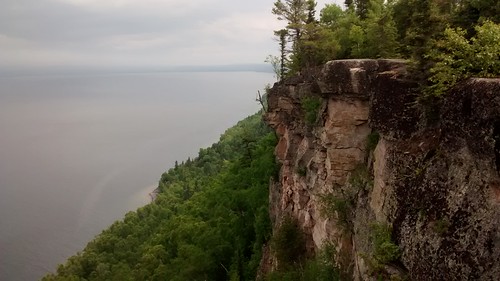 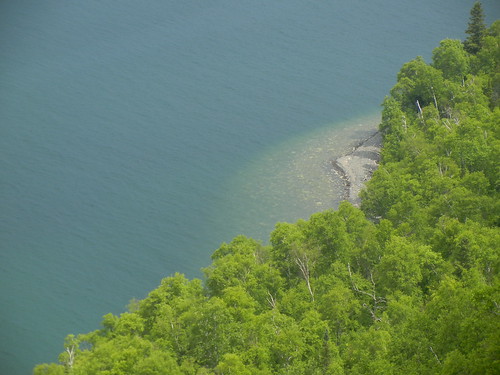 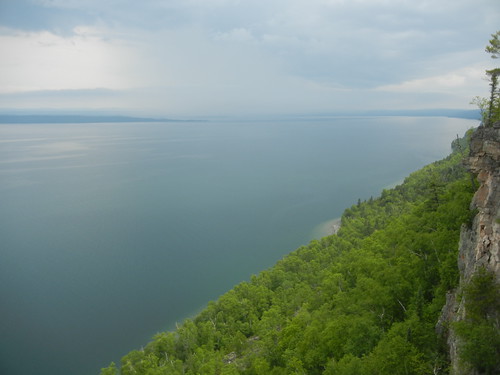 The view of the Giant wasn't good. Weather was moving in, there was fog on the lake. But I got a glimpse of it over Marie Louise Lake as I chatted with a couple in a canoe who had been blown by the weather to the end of the lake, and weren't real sure how they were going to get back.

South of the peninsula you get out of the provincial park and into this town Silver Islet. A little vacation community. It would seem to be prime real estate to me, and a few of the houses (cottages) were nice while others were run down. The store was closed. The car in front of it seemed to be a parable for the town. Once pretty fancy, but now uncared for and someone is just letting the tires go flat. 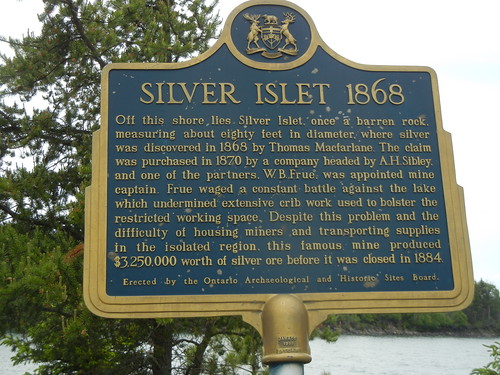 The rain finally came. Rain suit on I explored dirt roads coming off the peninsula. I didn't get to the shore much. All the land has been subdivided, and there were for sale signs on all of them, waiting for people to come and build their vacation homes.

I pulled into Ouimet Canyon. It was recommended by both the lady at Pass Lake and the city worker at Thunder Bay.

I still hadn't found a cafe, and hadn't really eaten since my breakfast banana. It was raining, but I set up under the porch of this little, empty ranger station and cooked a can of Boeuf I bought in Quebec last year. This family parked in front of the station, said bye to Grandma, locked her in the car, and hiked down to the canyon. And Grandma just sat in the car and watched me cook. She didn't seem friendly at all. She may not of known where she was. I just avoided eye contact. Ball caps are great for that.

Lunch, such as it was.

Then a hike to the canyon. Pretty cool. They really don't know how it was made. Maybe the earth just separated, pulled apart and left a canyon. Maybe a layer of softer rock beneath the surface washed away as glaciers melted, and this hard layer collapsed down into the void. No one seems to know. I bet there are geologists that study this, and get angry with other geologists that disagree with their pet theory. Yet, it is just vaguely interesting to everyone else.

Hiking out, there was this little piece of hawk nibble sitting out in the open next to the trail. I watched him a while, took a bunch of pictures, and wondered why he was so evolutionarily inept. His survival didn't look too good out in the open there.

And this mosquito landed on it. There were a lot of mosquitoes, and they were generally about a quarter of the size of this critter.

And the critter just freaked. It started twitching and jumped away a bit. And the mosquito found him again, and it freaked some more.

The woodland critter had just had enough of freaking mosquitoes, and his species hadn't invented DEET yet. 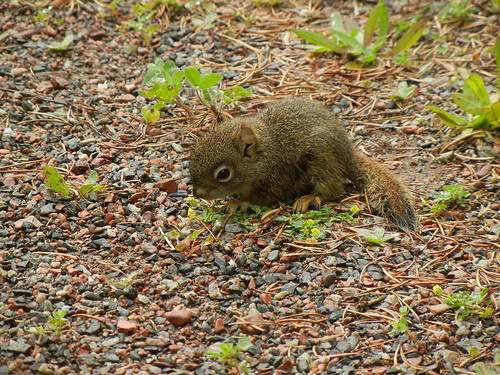 Down by the park sign there was a dirt road heading north that was in pretty good shape. The day was getting old and I didn't have sleeping plans yet. But ... bah, what's the point if you don't explore. Just a little bit.

So I'm just riding along, and all of a sudden as I climb a hill this huge windmill just kind of rises from the skyline to my right. There were three of them. And with the perspective and distance ... they were just mammoth. Intimidating.

And as I carried on, I realized the things were just everywhere. Spread over acres and acres these things just dotted the landscape. Then I remembered ... that guy back in Thunder Bay ... this is what he was encouraging me to "discover".

It was a pretty impressive discovery to me, worth it if you're in the area. Just, well there are roads everywhere. And it's easy to get lost. So spin that rear tire everyone once in a while, or do something to mark your trail, so you can find your way out. I almost didn't. 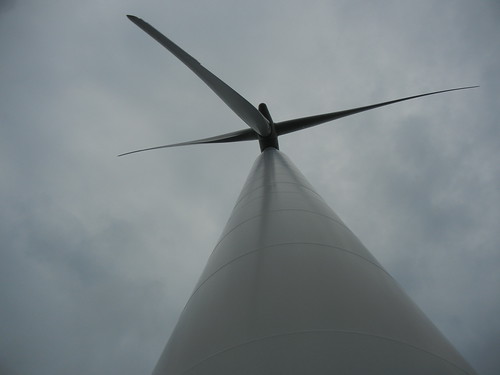 From there I just kinda made time to Nipigon. I grabbed a motel room. I had dealt with rain much of the day and more was scheduled for the evening. I grabbed some beers and settled in.

I had company. To my left were Chris and Alan and to my right was Cal: 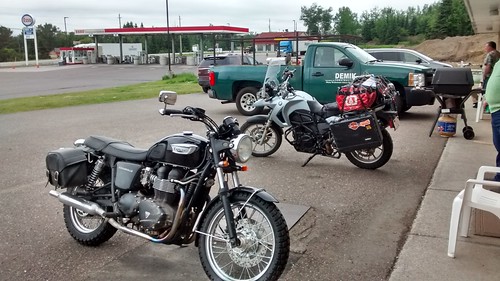 We ended up all having dinner at the diner together. Once again Ontario demonstrated its disdain for good food, but we had beers and good conversation.

Cal was from Saskatchewan and the other two were from Toronto. It was fun to listen to them gently give either other grief (We have everything in Toronto. ... Yeah, not the Stanley Cup!) and mock each other's governments. At least they agreed on one thing, no one had use for Quebec.

We talked healthcare systems. Cal was way too familiar with it since he wife had been awfully damn ill before she passed, it was a sad story. I guess the final answer was that the Canada health system was really good if you needed it, and not as good if you didn't need it (like for routine stuff).

They had good things to say about the US. They enjoy it down here, like the people a lot and all the choices we have. The only thing was ... why do you elect so many idiots? I did my best to defend us, trust me.

With that we wandered back to the motel. I turned in and watched a bit of TV, emptied one more beer, and slept. Lot's of trip left ahead of me.